Acne is one of the most frequent skin problems beauty institutes are confronted with. Acne customers and above all the younger generation among them often go through a personal ordeal and generally have high expectations of a cosmetic treatment.

Acne is a disease of the sebaceous follicles (the Latin word folliculus means tube) which lead into the hair canal (Fig. 1).

Sebum contains among others: 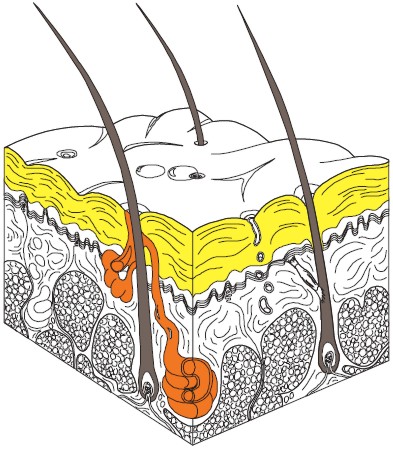 P. acnes produces a series of fatty acids with comedogenic effects. Additional substances causing acne are mineral oils (oil acne), tar (tar acne), chlorinated hydrocarbons (chloracne), drugs (acne medicamenta) and cosmetic substances. Greasing elements take a top position on the list of cosmetic substances as for example lanolin, cetyl alcohol, saturated fatty acids and their esters which however only react with a simultaneously humid and oily skin. In cases of sensitive skin, ethoxilated alcohols and polyethylene glycols (PEG) play an important part as both are used as emulsifiers and solubilizers. With the influence of ultraviolet rays and atmospheric oxygen they develop peroxides which on their turn will generate aggressive radicals thus causing the so-called Majorca acne. As these substances are widely used the cosmetician is advised to carefully study the INCI declaration. Even today sun protection products still contain these substances.

Ethoxilated alcohols can be recognized on the INCI declaration either by their middle or final syllable -eth, as for example ceteareth-10.

Acne can also be fostered by tight-fitting clothes as they create a moist and greasy environment.

There are various forms of acne as well as various different terms. They frequently depend on the current hormonal condition and may appear before the menstruation, ovulation or after pregnancy. According to Gollnick (1993) four major factors are responsible for the development of acne:

Furthermore, the genetic disposition, environmental influences and the mental condition play an important part. Naturally, the formation of comedones is specifically increased in areas with a higher density of sebaceous glands as for instance the face, decolleté area, the back and shoulders. The disease may develop minor or more serious symptoms and the WHO (World Health Organization) compiled a list with 10 different grades of acne.

Sebaceous gland hyperplasia may even develop on the elderly skin with isolated nodules of yellowish color, mostly to be found on the front and cheeks of men with very oily skin. In general the frequency of acne cases decreases in the thirties with the exception of a certain group of women with a tendency to develop acne in this stage of life. Also in these cases a hormonal influence is assumed.

Acne vulgaris which is the most common form of acne, of grade 1 or 2 responds pretty well to topic linoleic acid products prescribed by dermatologists and also used in beauty institutes as preventive measures. Preparations with linoleic acid in combined form which simultaneously have a vehicle function are more effective in this connection. A very interesting supplier of linoleic acid for skin care purposes are liposomes and nanoparticles, i.e. cell-like structures which are only visible with the help of electron microscopes. The base substance of liposomes is phosphatidylcholine (INCI declaration: lecithin). Nanoparticles have an additional and very useful property: They are able to store and transport sensitive substances as for example vitamin A which also supports acne prevention.

Clinical studies show that specific liposomal concentrates without any additional active agents reduce the number of comedones by more than 60 % (Fig. 2) and the efflorescences by more than 70 % within a period of 28 days.

Whether the essential linoleic acid taken in with nutrition also has positive effects on acne is not yet proved as it is differently metabolized in the skin. Isolated studies show that the consumption of animal fats and chocolate products containing hydrogenated fats have a rather supporting influence on acne. Extended studies however will not permit any generalization here. It is undisputed though that a calorie reduction for overweight individuals may also decrease the production of sebum and androgen which will result in a general improvement of the symptoms. 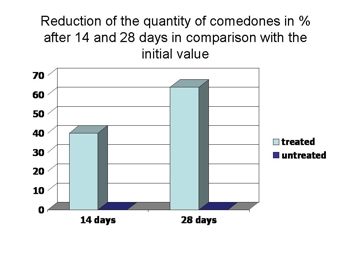 According to the developing factors of acne the dermatological treatment applies active agents which above all have:

Frequently the active agents have simultaneous effects. The phosphatidylcholine mentioned above which is rich in linoleic acid and can also be used in cosmetic products has sebum-liquefying, keratosis-preventive, lightly sebum-suppressive and regenerating effects for example. Several authors even describe an anti-bacterial effect regarding P. acnes.

In dermatological practices especially products with vitamin A-acid or other retinoids are applied for the treatment of hyperkeratosis. Azelaic acid also influences the cornification process while salicylic acid has keratolytic effects. Locally applied antibiotics like erythromycin or tetracycline for example are used in case of inflammations and also impede the growth of P. acnes.

Benzoyl peroxide also acts as an anti-bacterial substance. A hormone treatment for women with progesterone causes a sebum suppression. It is recommended to pay attention to the appropriate composition of base creams as well as the cosmetic products used in order to avoid counterproductive effects. Specifically emulsifiers and fatty substances may impede the healing process. More and more DMS bases are applied in dermatological products and individual pharmacy preparations as their composition and structures are similar to the skin (DMS = Derma Membrane Structure). A series of pharmaceutical active agents is also applied systemically.

A careful cleansing of acne foci accompanies the therapeutic treatment. Peelings may be very helpful in this respect as they facilitate an opening of the follicles. A light massage in combination with a peeling treatment may support the removal of congestions in the sebaceous glands.

Only experienced and well-trained personnel however should manually squeeze the comedones by applying light pressure. Optimal hygienic conditions and a competent cleansing technique are important preconditions. The individual treatment however depends on the specific acne symptoms. A close cooperation between dermatologist and cosmetician generally is indispensable in order to achieve best results.

Only physicians should be trusted with the treatment of acne. Beauty institutes however can offer competent assistance and support to accompany the treatment.

In the beauty institute the pre-treatment of acne generally starts with hot steam (Vapozone) which causes the pores to dilate so that the following manual therapy may be performed in a very gentle way. Most of the Vapozone devices enable the cosmetician to work with essential oils like lavender or balm oil which have a soothing effect and support the well-being. As the mental condition also plays an important role in combination with skin problems an attractive atmosphere may be very helpful and relaxing. For acne forms like acne comedonica which will not develop any major inflammations and pustules a gentle peeling is recommended after the Vapozone treatment which also has a preventive influence on the formation of comedones if applied regularly. It is advised to choose peeling products which already have a skin-caring effect and simultaneously are free of comedogenic substances, minerals oils and emulsifiers.

Minor acne scars and major cornifications may be treated by applying electric grinding accessories. In the dermatological practice permanent scars can also be attended or removed by dermabrasion, kryopeeling and injection techniques (funnel-shaped scars).

Mechanical peeling and massaging treatment should be avoided in cases of inflammatory manifestions like acne papulopustulosa in order to escape additional smear infections. Instead of massaging it is advised to recur to manual lymph drainage.

A soothing and anti-inflammatory mask will complete the acne treatment in the beauty institute. Modular cosmetic product systems offer a variety of possibilities to individually adapt to the different forms of acne. Active agent concentrates (ampoules) can be combined with a cream base which is adapted to the sebum content of the skin. Active agent concentrates like D-panthenol, aloe vera and hyaluronic acid soothe the skin and reduce the skin reddening which resulted from the treatment.

In case of major cornifications, milia and scars a combination of a DMS base cream with a low fat content, vitamin A nanoparticles and liposome concentrate is recommended.

Healing earth can also be used as a base for masks especially for cases of seborrhoe oleosa. In contrast to cream bases they will completely be removed after about 20 minutes. In case of any inflammations diagnosed however the mask never should begin to dry. In this connection the mask is to be covered with moist compresses.

For the treatment of acne tarda which may develop around the age of 30 (see above), frequently is very persistent and shows a scaly and tense surface of the skin, masks and lotions containing nanoparticles have proved successful. Nanoparticles which contain natural phosphatidylcholine with a combined linoleic acid compensate the deficiencies which are characteristic for this type of acne. In contrast to liposomes, nanoparticles also contain higher amounts of fatty substances, a feature which perfectly corresponds to the requirements of the typical 30+ skin. It is essential to avoid mineral oils as they may also have comedogenic properties in addition to their occlusive effects.

When cleansing acne skin it should be taken care (and this especially applies for the use at home) that only cleansing agents without re-fattening substances are used as those could cause counterproductive effects. Besides cleansing gels also liposomal lotions have proved successful in this field as they already transport linoleic acid with the above mentioned effects into the skin. It has to be added that the phosphatidylcholine of the liposomes also positively influences the scarring: existing scars are considerably softened.

The dryness of the skin surface which occurs due to the dermatological treatment with benzoyl peroxide or retinoids can be alleviated with a gentle DMS cream.